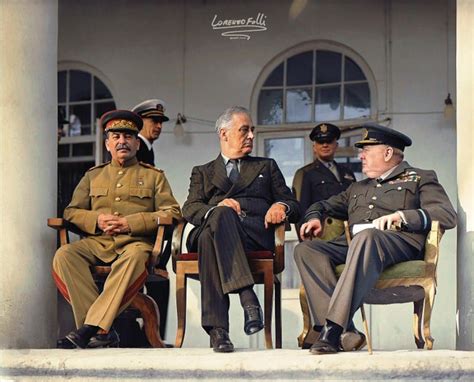 This will be the first-ever credible, or “historical,” but brief, account of how the Cold War actually began, and of why it started, and of why it continues today (even though it started on the basis of lies which have long-since become exposed but — for reasons which will become obvious — the exposing of which deceits remains hidden from the public, so that ‘history’ can be preserved, and the public thus remains fooled to believe the myths).

To understand today’s world, an introduction is needed first that summarizes what World War II (the Cold War’s predecessor) was actually all about, in geostrategic terms:

The key decision-makers who coordinated together, in order to defeat the three fascist powers of Germany, Japan, and Italy, in WW II, were America’s Franklin Delano Roosevelt (FDR), Britain’s Winston Churchill, and the Soviet Union’s Joseph Stalin. If any one of those three would abandon the Allied side, or as FDR anticipatorily named it the “United Nations,” then the Axis would win the war, and then a war between the three Axis leaders — Hitler, Hirohito, and Mussolini — would follow afterward, in which Hitler was generally considered to be the likeliest to achieve his “Thousand Year Reich”: global control. If so, the result would have been a Nazi-controlled planet. But each of the three Allied leaders had different political views and priorities, which affect us today.  (more...)