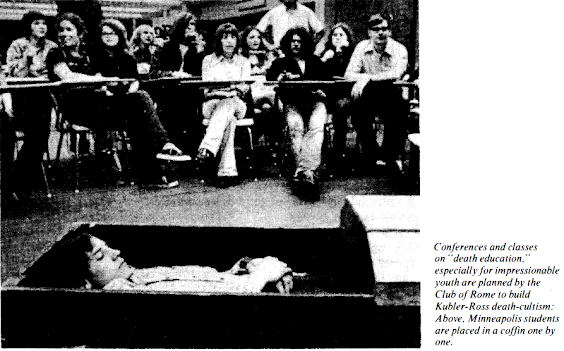 Most Americans, had they attended the March 16-18 conference of the U.S, Association for the Club of Rome in Bethesda, Maryland, would have come away from the proceedings in stunned disbelief. In line with the global zero-growth efforts of the parent organization (the Club of Rome International), the focus of conference discussion was a campaign over the next few years to compel Americans to ideologically "adapt" to the "death of the American dream of material and technological progress." Accordingly, it was only the first in a series of such conventions scheduled for the United States in coming months and years.

In Club of Rome parlance, this is "The Great Transition." Club of Rome methods, outlined in horrific detail throughout the proceedings, are the same ones employed by ruling oligarchies since the time of the pharoahs. They intend to spread cults, in religious, satanic, environmentalist and death-worshipping varieties, endowing the population with "the means to cope" with the miseries and social chaos that will follow an impending American economic catastrophe.

The conference therefore went substantially beyond the limits-to-growth propaganda for which the Club of Rome organization is already internationally notorious. Organized around the theme, "The Human Side of the Energy Transition," speakers and participants were drawn from a broad spectrum of Episcopalian and Jesuit theologians, solar energy advocates, environmentalist collectives, consumer-action types, radical women's groups, political pollsters expert in American susceptibilities, and self-professed specialists in "death and dying."

The latter were the featured participants. The most pronounced and persistent reference point of the gathering was the death-cult idea of Elizabeth Kubler-Ross, leader of the "Death with Dignity" and Hospice movements, who reports without a blink that she spends a growing percentage of her time having illicit relations with the spirits of dead people at her Place-to-Die-inDignity Hospice in Escondido, California. The application to Americans, en masse, of Kubler-Ross's prescriptions for helping individuals cope with the grief of dying, was the Club of Rome's specific interest.

Speaker Larry Kagan of the prestigious Yankelovich, Skelly and White polling agency put it this way:

There is social bereavement associated with the end of decades of booming industrial growth, the end of the days of America being the steelmaker and automaker of the world. As we move out of the industrial phase of society and into the information phase, the hope is that we can help people adapt to this new reality, just as Kubler-Ross helps people cope with dying.  (more...)