IG Farben and the History of the “Business With Disease” 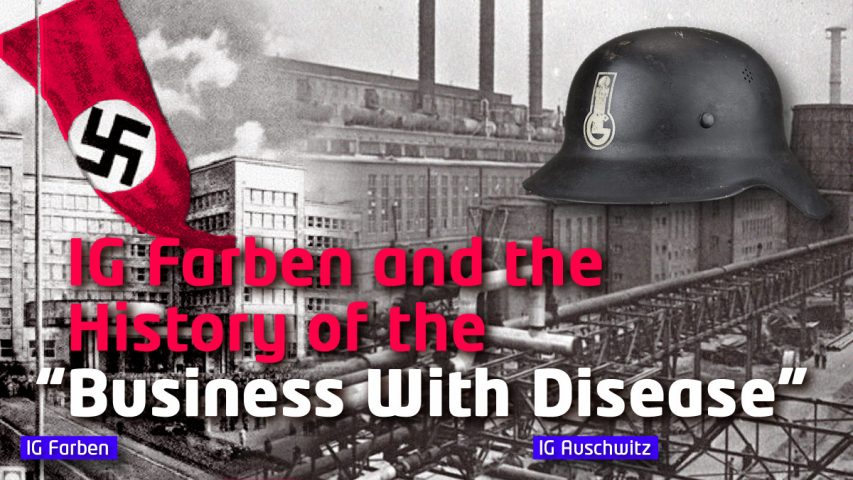 The most powerful German economic corporate emporium in the first half of this century was the Interessengemeinschaft Farben or IG Farben, for short. Interessengemeinschaft stands for “Association of Common Interests” and was nothing more than a powerful cartel of BASF, Bayer, Hoechst, and other German chemical and pharmaceutical companies. IG Farben was the single largest donor to the election campaign of Adolph Hitler. One year before Hitler seized power, IG Farben donated 400,000 marks to Hitler and his Nazi party. Accordingly, after Hitler’s seizure of power, IG Farben was the single largest profiteer of the German conquest of the world, the Second World War.

One hundred percent of all explosives and of all synthetic gasoline came from the factories of IG Farben. Whenever the German Wehrmacht conquered another country, IG Farben followed, systematically taking over the industries of those countries. Through this close collaboration with Hitler’s Wehrmacht, IG Farben participated in the plunder of Austria, Czechoslovakia, Poland, Norway, Holland, Belgium, France and all other countries conquered by the Nazis.

The U.S. government’s investigation of all the factors leading to the Second World War in 1946 came to the conclusion that without IG Farben the Second World War would simply not have been possible. We have to come to grips with the fact that it was not the psychopath, Adolph Hitler, or bad genes of the German people that brought about the Second World War. Economic greed by companies like Bayer, BASF and Hoechst was the key factor in bringing about the Holocaust.  (more...)


IG Farben and the History of the “Business With Disease”