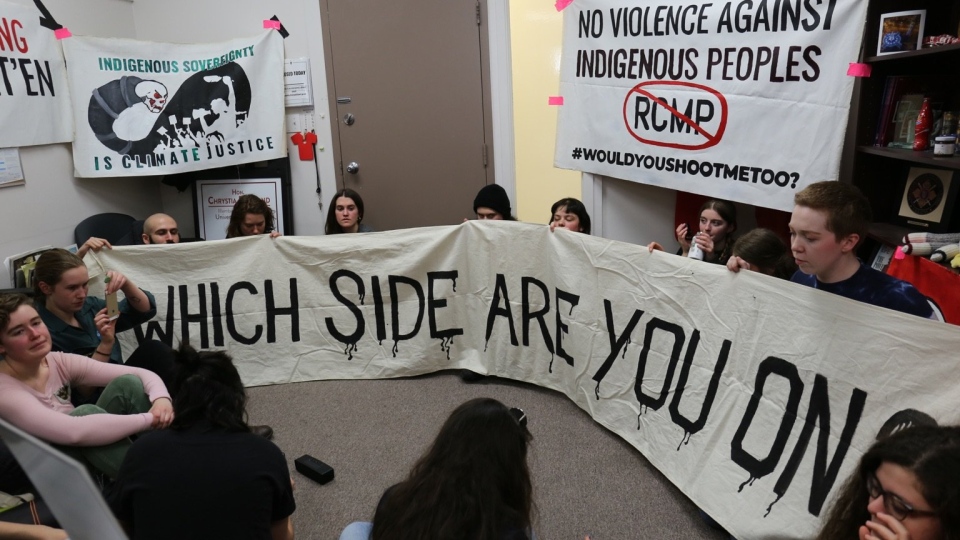 TORONTO -- Climate activists in Toronto and Vancouver Island halted traffic and disrupted the office of Deputy Prime Minister Chrystia Freeland in hopes of pressuring the government into halting a pipeline project through the Wet'suwet'en First Nation territory.

In Toronto, 19 activists from Climate Justice Toronto occupied Freeland’s constituency office for much of the day Monday with signs reading “No violence against Indigenous people” and “No trespassing on Wet'suwet'en land.”

“Chrystia Freeland did not answer at all,” Dafna Cohen, one of the CJTO organizers, said in a phone interview with CTVNews.ca. “We really hope that she got the message clear, but we will continue and continue to be in solidarity with the Wet'suwet'en.”

Coastal GasLink has provincial approval for a 670-kilometre natural gas pipeline from British Columbia's northeast to the coastline, but the Wet'suwet'en hereditary clan leaders say the company has no right to run a pipeline through their land without consent.

The company has signed agreements with all 20 elected First Nation councils in the pipeline’s path, but the hereditary clan leaders say that under traditional forms of governance, the project needs their approval as well.

The hereditary clan chiefs have been clear that they will never support the project. At the end of 2019, they issued an eviction notice to Coastal GasLink, which led to a second standoff in the area.  (more...)