Holodomor Hoax: The Anatomy of a Lie Invented by West's Propaganda Machine 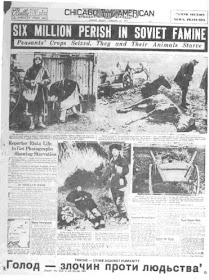 Since the October Revolution of 1917 in Russia, Western media has made every effort to downplay the achievements of the Soviets, creating a picture of complete horror and despair which had allegedly engulfed the USSR.

The bold historical experiment kicked off by Communists and based on the concept of a "fair distribution of national wealth," egalitarianism and internationalism, made the blood of Western plutocrats run cold.

Historians note, that Soviet Communism was the absolute antithesis of capitalism. If the new system proved effective it would have changed the world forever. Needless to say, it did not comply with the plans of the Western financial and political elite.


"Those in positions of power in capitalist countries see socialism as a threat to their continued profit and privilege. Both to undermine support of a socialist alternative at home, and to maintain a dominant position in international economic and political relationships, all manner of lies and distortions are employed to cast the USSR in as negative a light as possible," Canadian researcher, trade union activist and author Douglas Tottle wrote in his book "Fraud, Famine and Fascism: The Ukrainian Genocide Myth from Hitler to Harvard" in 1987.

In his book Tottle presented the detailed history of the West's propaganda campaign based on the thesis that the 1932-1933 famine in Ukraine was a deliberately planned "genocide" of Ukrainians by the Soviet government. Tottle's research has acquired new meaning today, as a result of the so-called "Ukrainian Holodomor" myth catching a second wind in Ukraine and in the West.  (more...)


Holodomor Hoax: The Anatomy of a Lie Invented by West's Propaganda Machine

Fraud Famine and Fascism - Thomas Walker The Man Who Never Was 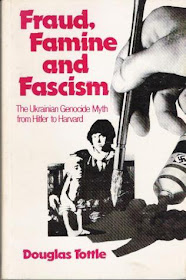