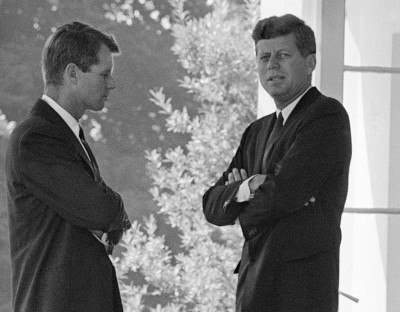 “‘We’re all puppets,’ the suspect [Sirhan Sirhan] replied, with more truth than he could have understood at that moment.” – Lisa Pease, quoting from the LAPD questioning of Sirhan

When Senator Robert Kennedy was assassinated on June 5, 1968, the American public fell into an hypnotic trance in which they have remained ever since. The overwhelming majority accepted what was presented by government authorities as an open and shut case that a young Palestinian American, Sirhan Sirhan, had murdered RFK because of his support for Israel, a false accusation whose ramifications echo down the years. That this was patently untrue and was contradicted by overwhelming evidence made no difference.

Sirhan did not kill Robert Kennedy, yet he remains in jail to this very day.  Robert Kennedy, Jr., who was 14 years old at the time of his father’s death, has visited Sirhan in prison, claims he is innocent, and believes there was another gunman.  Paul Schrade, an aide to the senator and the first person shot that night, also says Sirhan didn’t do it. Both have plenty of evidence.  And they are not alone.

There is a vast body of documented evidence to prove this, an indisputably logical case marshalled by serious writers and researchers. Lisa Pease is the latest.  It is a reason why a group of 60 prominent Americans has recently called for a reopening of, not just this case, but those of JFK, MLK, and Malcom X.  The blood of these men cries out for the revelation of the truth that the United States national security state and its media accomplices have fought so mightily to keep hidden for so many years.  (more...)


The CIA Takeover of America in the 1960s Is the Story of Our Times. The Killing of the Kennedys and Today’s New Cold War