Sick and Twisted Toronto: Dramatizing the interrogation of Russell Williams an act of cold-blooded voyeurism 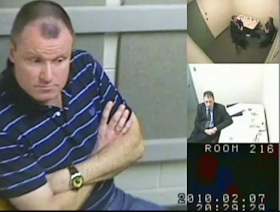 There is a new chapter in the ongoing saga of serial killer narratives and whether they amount to art or outright exploitation. The latest cruel piece of business is not a play, exactly, but a “staged transcript” of the interrogation of disgraced former Canadian Forces colonel Russell Williams, the one that made a household name of Det. Sgt. Jim Smyth of the Ontario Provincial Police.

One Little Goat Theatre Company’s production of Smyth-Williams is scheduled to open next week at Theatre Passe Muraille’s Backstage in Toronto. The public is virtually unanimous that murderers should never profit from their crimes, but reaction to the artistic community’s role in hocking tickets, or books, or made for television movies — and our role in consuming that output — is much more unsettled.

There is a very blurry line between what often begins with awareness-raising and too often ends with infamy-making. When the force and intensity of the public gaze turns away from the suffering of victims toward perpetrators, a secondary act of violence is committed: an act of cold-blooded voyeurism that leads to forgetting them and remembering him.  (more...)

I've frequently highlighted the many bizarre aspects of my city and my alma matter in this chronicle. The Williams/Bernardo bromance epitomizes, in a way, the underbelly of weirdness I've discovered about my neighbors and classmates. Funny how, just as it became part of our low culture, I discovered an in-depth exploration of the meaning of it all:


At Her Majesty's Service